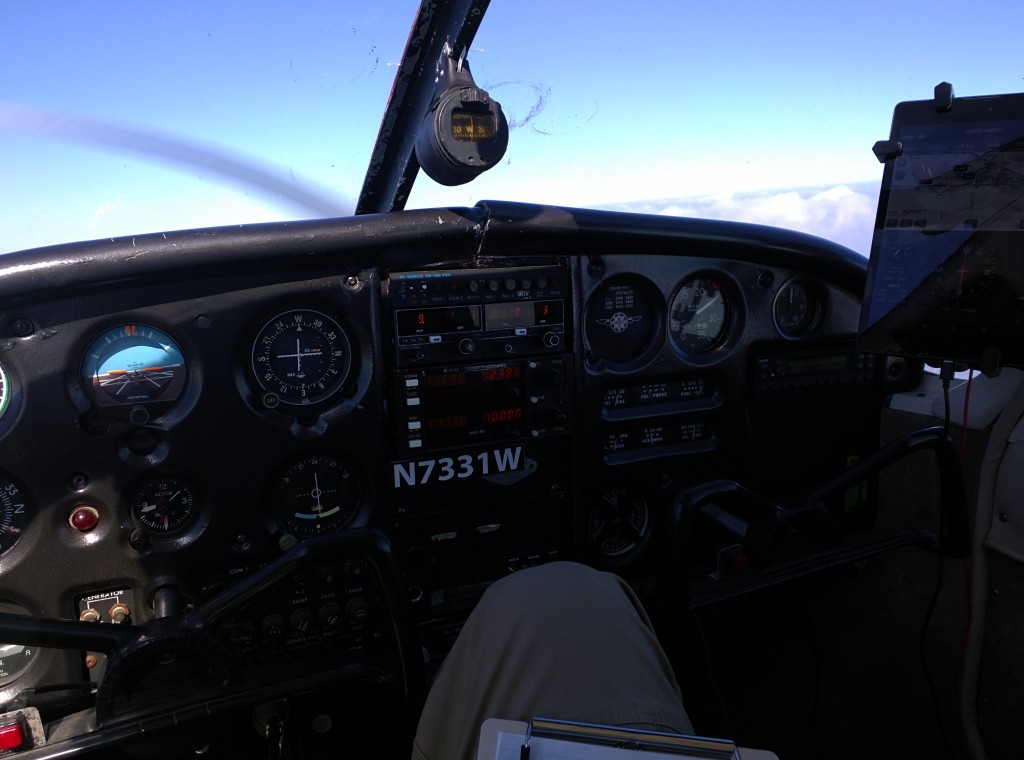 A few weeks ago I took and passed the practical exam for my instrument airplane rating and I have been putting it to good use ever since. One of the more complicated things about the instrument rating are the emergency procedures while in instrument conditions, and especially the lost communications procedures. That’s where I had some trouble during training, but with a little studying I eventually figured it out and aced that section of my oral exam. Little did I know I’d soon be needing to use that knowledge in a real life situation less than a month later.

The planets had aligned to give me the ideal vacation. I had just purchased a 1963 Piper Cherokee PA-28 180 and flown it back to San Antonio for some minor repairs (worn seals and hoses, nothing major), and the shop had it all ready to go a few days later. With six weeks of vacation to burn, a new airplane, and nothing to do, I set out to fly up to Cape Cod and tool around the northeast for a while before heading back down to Texas.

I made Provincetown my base of operations, and one of the trips I wanted to take was a day trip out to State College, Pennsylvania. That’s where I had gone to school, and one of my professors had invited me out to talk to their class about working in the IT security field one day. The plan was to get up early, fly out to State College (only about 3 hours in the air, not even the longest flight I had taken in this airplane), and arrive in time to talk to an 11 AM class. After a day on campus I would fly back to Provincetown and get back to doing exactly nothing.

The morning of the flight I woke up early and hopped a ride out to the airfield to get rolling. I had been watching the weather forecast all afternoon the previous day and the general consensus seemed to be for IFR conditions in the morning followed by rain showers and isolated thunderstorms during the day on the Cape, and a relatively high overcast layer over State College with some rain showers during the day. I would definitely need that IFR rating to get the job done but it was still well within the realm of possibility.

What had me the most concerned was that the forecast was calling for an overcast ceiling of around 500 feet over my departure airport. As a private operator under Part 91, I can takeoff in whatever conditions I want and don’t have any real “minimums.” That said, if I took off in IFR and had a problem, the low clouds might keep me from doing a direct abort and getting back into the airport. The lowest approach to the airport is available using the ILS to runway 7, and the decision height on that approach is 208 feet (320 without a glideslope). If the clouds were any lower I might not be able to get back in, and if I lost the radios I wouldn’t be able to get back in at all. 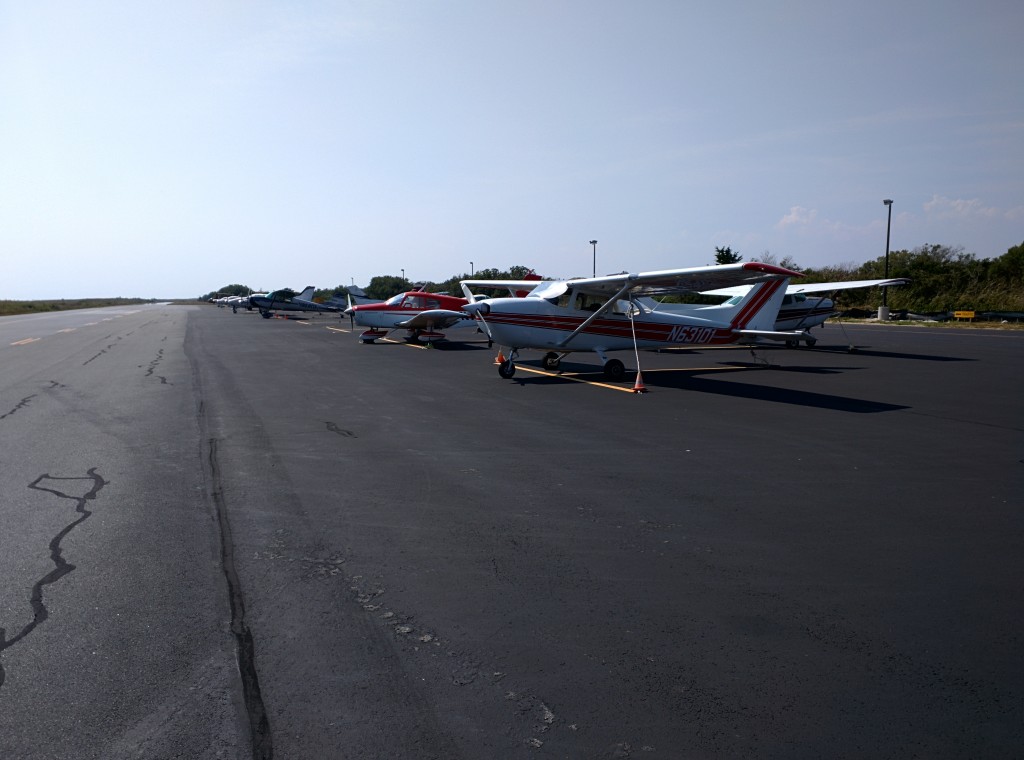 Out at the airport, the METAR didn’t seem to match reality.

On the flight line I was looking at blue skies and some high clouds, but nothing that looked like an overcast layer at 500 feet. Provincetown’s automated weather system had apparently been mis-reporting the cloud cover for about a week (“sky condition missing”) so I figured that the apparent discrepancy between the AWOS and the actual conditions was due to poor equipment and not that I was missing anything.

The clouds weren’t concerning, but there was something on the ground that had me a bit nervous. During the night the temperatures had dropped low enough that there was dew on the aircraft and I had to towel off my windows before starting up for the day. I had never had to deal with dew-covered equipment on this aircraft before, so seeing how it worked when moist would be interesting.

With apparently clear skies and light winds I decided to hop in and get going. I started up the engine right on time and called Cape Approach on the radio to get my IFR clearance. They called back with a full route clearance (apparently not one single fix on my route was satisfactory), I read it back exactly correct, set all the radios and stuff, and then headed out to the runway for takeoff.

Climbing out of Provincetown I swapped from the CTAF over to the assigned Cape Approach frequency and started calling to check in. Having done a couple flights out of the area already I knew that reception was pretty poor when I was down low, so it didn’t concern me when my calls to Cape Approach went unanswered for the first 2,000 feet of climb. I leveled off at 3,000 feet — my clearance limit — and repeated my call once more, but again there was no response.

Ever since I picked up the airplane I’ve been having some intermittent radio issues. The #1 NAV/COM seems to be a bit temperamental, but the #2 radio always works. I had deferred that bit of maintenance until after returning from vacation but now I was regretting that decision. Getting no response on the #1 radio I tuned the #2 radio to the proper frequency and immediately heard Cape Approach calling for me to check in. I keyed the mic and replied, offering a short apology, but Cape Approach didn’t respond. I tried again and noted that the transmit light on the COM radio was lit up when I pressed the “push to talk” button, but again there was no response. I tried cycling the avionics master switch and the power for each individual radio with the same result. Then Cape Approach chimed in and let me know what was going on.

I was on an active IFR flight plan, I had received my clearance, and despite being in radar contact I had no radios. I quickly considered my options.

As any IFR rated pilot knows at this point I was OK (theoretically) to continue to my destination, make any approach I wanted, and land at my ETA. With a valid IFR clearance that airspace is mine, and it is up to ATC to keep everyone else from crashing into me. I pretty much discarded this option immediately since the lost radios could be indicative of a bigger issue with the airplane, something like an electrical fire. My first instinct was that the moisture from the dew on the airplane had worked its way into the wiring for the radios and shorted out the connections. While that might clear itself up shortly, it could also very quickly lead to an electrical fire or start impacting other systems.

My choice was to get on the ground as quickly as possible, but in an IFR environment the only way to deviate from your assigned route and altitude is if you are in Visual Meteorological Conditions. As luck would have it I was indeed clear of clouds and VFR, but I still had to choose a destination.

The most obvious choice was a straight return to Provincetown, but that might not be the best choice. Provincetown airport is a remote strip in the middle of a bunch of sand dunes and while there’s fuel on the field that’s just about it. There’s no maintenance shops or other support facilities, just a strip of concrete. A little further south is Chatham Airport, a more populated airstrip with a nice long runway and a mechanic on the field. I flew out of there earlier this year and was familiar with the airport but a quick look out the left window of the airplane revealed that I probably wouldn’t be able to get there and maintain VFR. That was the same story for another airport (KHYA) with a mechanic on the field but unfortunately not VFR conditions.

I decided to turn around and land back at KPVC. The very first thing I did was swap the transponder code from my assigned code to 7600 (no radio). As soon as I made the swap Cape Approach piped up on the radio.

I hit the IDENT button on the transponder and started a right hand turn to get back towards Provincetown. Out the front window of my airplane I could see the outline of the tip of Cape Cod, but just like the faulty ASOS had predicted there was a thin layer of mist at about 500 feet keeping me from seeing very well. I had great visibility for a few miles around my airplane but anything further away was shrouded in fog. Using the NAV radio I tuned in the localizer frequency for runway 7 at Provincetown and started tracking back to the airport to see if I could land visually. As soon as I crossed the shoreline the runway for the airport came into view and I was sure I could make a normal VFR landing. I think Cape Approach came to the same conclusion.

I pushed the button.

Roger, N7331W you are cleared for the visual approach to Provincetown, when on the ground contact…

The radio fizzled out for good at that point. I broke off from the localizer track to enter the right downwind leg for runway 25 and made sure to stick closer than normal to the runway to make sure I never lost sight of it. Turning base and final I kept one eye on the instruments and the other on the end of the runway, and after rolling out on final I made a rather low approach into the airport for landing.

After turning off the taxiway I tuned back to the Cape Approach ground frequency, which had heard me perfectly fine before I left. I keyed the mic and announced myself.

N7331W, if that’s you we are still getting carrier only. If you’re on the ground use a phone and contact…

I copied down the phone number and then clicked the transmit button twice hoping that they would be able to interpret that radio shorthand and hold off on sending out the search and rescue party until I could get to a phone. Immediately afterwards I shut off the avionics master switch since I no longer needed any of them and the shorted out radios might be on the verge of causing another issue. There was no fire in the airplane yet, but I sure as hell wasn’t going to take any chances.

Hastily parking the airplane on the side of the taxiway I hopped out and headed into the terminal building. My phone didn’t get any service out at the airport, and the only place I knew where there might be a phone was inside the flight planning office. Called the number provided and the controller on the other end calmly acknowledged that I wasn’t dead and cancelled my IFR flight plan. He asked me if I wanted to file another flight plan and try to fix the radios but I declined. I would much rather get the radios checked out by a professional before trying anything like that again.

UPDATE: Testing the radios, things are coming back to normal.