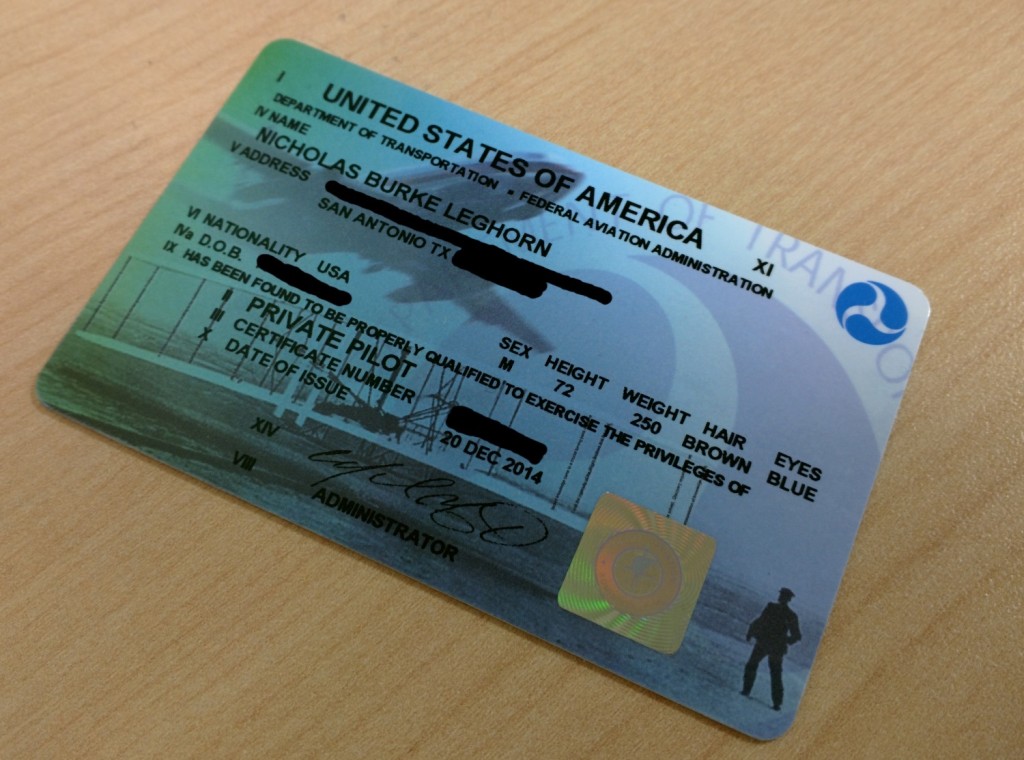 I’ve seen a couple posts recently over on Reddit asking about the costs involved with a private pilot certificate. Its a common question, and while some of the FBOs that offer instruction try to put a number on the amount of money you’re about to drop, those are based on estimates and not necessarily a real world example. For those thinking about taking the leap, I figured it would be a good idea to put my own numbers out there detailing exactly how much money it cost me to go from zero flight hours to passing the private pilot checkride.

First, a little note about the two paths you can take.

In flight training, you can either train under “Part 61” or “Part 141” rules. The numbers refer to different bits of regulation in the FAA regulations, and you can look up the specifics of each on the FAA’s website. The difference boils down to this:

It seems like most people prefer Part 61 instruction because it can be more flexible, but for me I decided to go with a Part 141 school. I liked the idea of a regimented flight training program, and since the flight school broke out the ground instruction into an actual class it gave me a rigid structure that forced me to read the entire flight training textbook and reinforced the concepts being taught in class. When looking over the expenses listed below, keep in mind that these numbers will vary depending not only on how well you take to the instruction but also which type of instruction you choose.

Another thing to note is the schedule. The below expenses were incurred over the course of about 10 months, from February 2nd 2014 to December 20th when I passed my check ride. The ground school took about two months, and the flights were spread out roughly two per week over the course of the remaining months. There were some patches of inactivity in there when the weather wasn’t great or I needed to be off somewhere else for work, but that two flight per week pace is about what I kept up the entire time. I get the feeling that a more concentrated schedule might have reduced the total flight time and therefore the costs, so take this as you will.

Finally, a note about geography. This was the cost for me in San Antonio, Texas. Prices will vary depending on your location, and will even fluctuate from one FBO to the next.

When I decided to start flight training, the very first thing I bought was my own aviation headset. Sure the flight school I wanted to attend had headsets I could borrow, but I figured that if I was serious about flying and continuing after I got my certificate then I should have my own headset. Plus, the idea of wearing a communal headset for hours on end just felt… dirty. I wanted my own headset, a clean one. In the end, it was probably the best $300 I spent.

At the flight school I attended, the ground school portion of the flight training was a 7 week course that met three times a week for two hours a piece. That’s a total of 42 hours of instruction, well above the 35 required by the FAA for a Part 141 ground school. I thought it was well worth the money, not necessarily for the quality of the in-class instruction but for giving myself a framework for studying and someone to talk to when I came across a tough question.

Included in that price are three sub-items I wanted to break out:

The actual instruction was only about $300, but the rest of that price was for the textbooks and other associated accouterments. The ground kit included things like a copy of the FAR AIM, the textbook we were using to learn all the ins and outs of flying, and a study guide for the written exam. The flight kit included more of the practical gear, like a mechanical E6B flight computer, plotter, copy of the practical test standards, and a handbook for flying the required maneuvers. Was all of it really necessary? Probably not. But it was required gear for the ground school, and it was handy for reference and use in class.

The most useful thing that came in the bag was the ASA trip planning worksheet pad. That thing is just the tops for organizing your flight and making sure you have all the calculations you need.

At the end of the ground school, we were endorsed to go take the FAA written exam. Helpfully the flight school was also a computer testing center, so we were able to walk downstairs and take it right in the same building. I passed on the first try, and the fee they charged for the privilege was a cool $150.

With the ground portion complete, the next step was to actually fly the airplane. I’m going to slice this out into three categories: ground instruction, flight instruction, and airplane rental fees.

This includes two different categories of instruction rolled into one.

The first kind of instruction is the usual pre-flight stuff. You don’t just roll up to the FBO and immediately hop in the airplane — there’s a bunch of talking to do first about the plan for the day and the maneuvers about to be taught in the air. It also includes post-flight debriefing, when you’re filling out the log book and talking about that last disaster of a landing that you plunked onto the runway. Its extremely valuable instruction time, and charged as such to my credit card.

The second kind is stage check exams. For the Part 141 school syllabus, they instituted “stage checks” every so often where a different instructor would sit down with you and grill you about all the topics you should know by now. Its like a series of mini oral exams, meant to prepare you for the check ride oral exam portion and make sure that you actually know what you should know. Useful, but it usually takes up about as much time as four regular flights.

Flight instruction is the added fee for having the CFI sitting in the right hand seat when the engine is running. This is the actual dollar amount I paid for instruction inside the airplane itself, not including time talking on the ground. Put ground instruction and flight instruction together and you have the total I paid for one-on-one time with an instructor.

Without a doubt, the biggest expense was the airplane. Naturally I chose to do my flight training in the most expensive airplane in their fleet, a Cessna 172SP, but since that’s the most common airplane I’d be renting (or owning) in the future I wanted to invest in getting to know it while I had a CFI with me to show me the ropes. It was about $15/hour more expensive than the Symphony 160 aircraft they prefer to use, but over the course of my flight training that difference was only about $980.

Crap. Looking back, I may have made a mistake. Definitely going with the Symphony for instrument training.

The fee for the DPE examiner was paid directly to the DPE himself (or, more accurately, his wife). That covered all of his time and expenses for the event, and your mileage may vary depending on your DPE.

Yeah, that’s a ton of money. I know. But as the person who spent it (and has now paid it all off), I can say with 100% certainty that it was worth every penny just for this one trip.