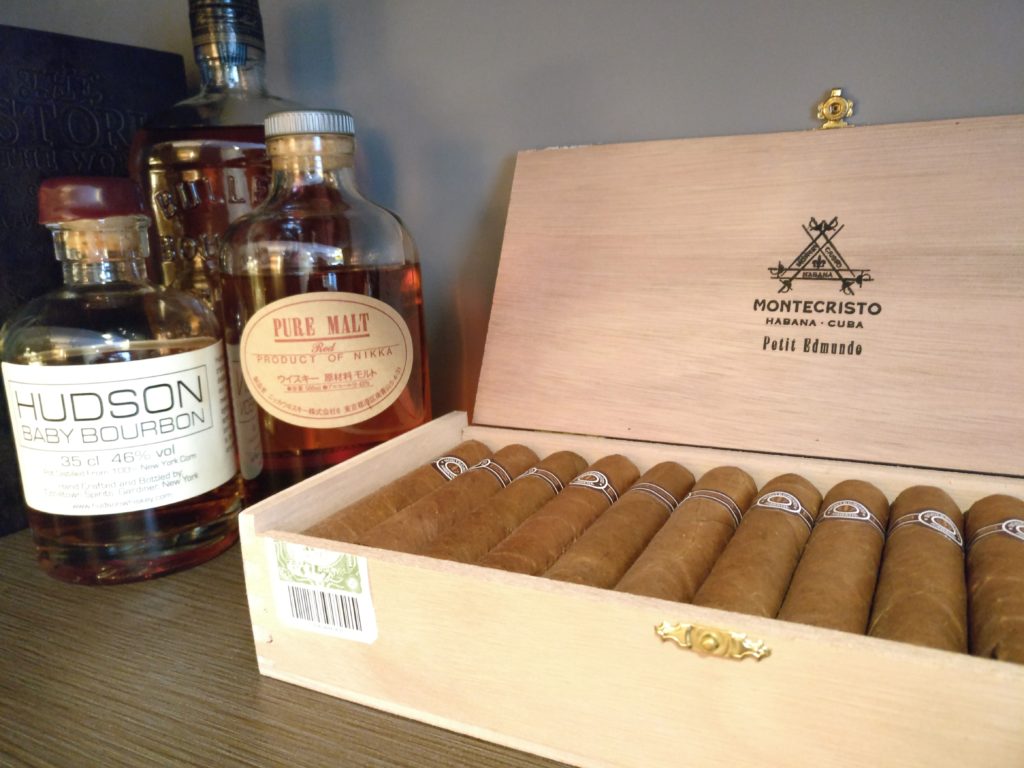 I’m based in Austin, Texas, but three weeks ago I was in Paris, France. I had found the woman of my dreams, and as if to prove that point she also wanted a small wedding with only a few close guests. We figured that the best way to discourage the less desirable members of our family from attending the ceremony was to hold it somewhere overseas, and after visiting Paris last December we fell in love with the city and decided to hold it there. The architecture is amazing, the food is delicious, and most importantly there are Cuban cigars.

I’ll save you the details, but suffice it to say the process was not easy. Nevertheless three weeks ago we arrived in Paris, planning completed, and settled in for the big day.

My first order of business: a coffee and chocolate croissant for my jetlagged and hangry bride to be. My second order of business: finding a box of Cuban cigars. Just down the street from our hotel was a cigar shop that fit the bill — not only did they have some Cuban cigars in stock, but they had some full boxes ready to go in the back. The clerk pulled an unopened box of Montecristo Petit Edmundos out of the humidor (duly verified as authentic Cubans), I handed him all my Euros, and walked back to the hotel mission accomplished.

I smoked about half the box that week (with some help), but about fourteen cigars made the journey (cedar box and all) to our small honeymoon in Nice and Aix-En-Provence and back to the United States via three airplane flights, two high speed trains, and some less than gentle cab rides in my carry on bag. I dutifully declared them at customs, and the customs officer waved me through without so much as asking me to open my bag. As soon as I walked in the door I transferred the sticks into my humidor looking none the worse for wear.

Back in my home town this afternoon I figured that the 99 degree weather was perfect for taking my dog Rudy for a walk and enjoying a fine cigar. I grabbed the first one off the stack along with my cigar smoking kit and headed out the door. 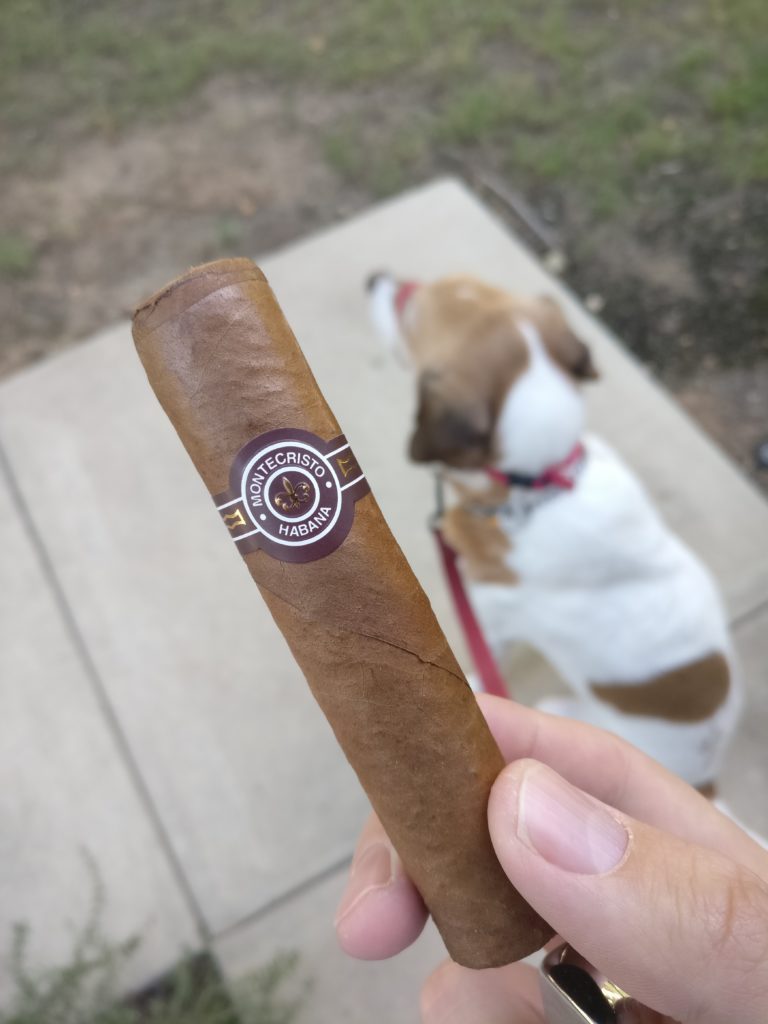 The Montecristo Petit Edmundo is, as the name suggests, small. It’s a good 52 ring gauge width, but the actual length is about the same as the Padron 1964 Principe that I’m more accustomed to seeing. According to other sites online that makes for a good 20 minute smoke but I tend to take my time and have found that these are more like a 45 minute smoke for me.

Looking at the cigar the wrapper is a natural brown color that is cleanly constructed. Even after weeks of rolling around in my carry on bag the wrapper shows no signs of wear and tear, and the cap is perfectly in tact. For those looking for a cigar that travels well this might be a good contender.

I prefer a straight cut, and in this case the cut was clean and the cigar held together perfectly. There was no stray material falling out the bottom and the cut resulted in a fairly good draw. I’m used to a much easier draw from the Padron series, but the Montecristo seems to be rolled a little tighter. That said, it wasn’t hard to get a proper draw. The pre-light draw seemed to have some notes of cedar mixed in with the usual tobacco smell but nothing else remarkable. 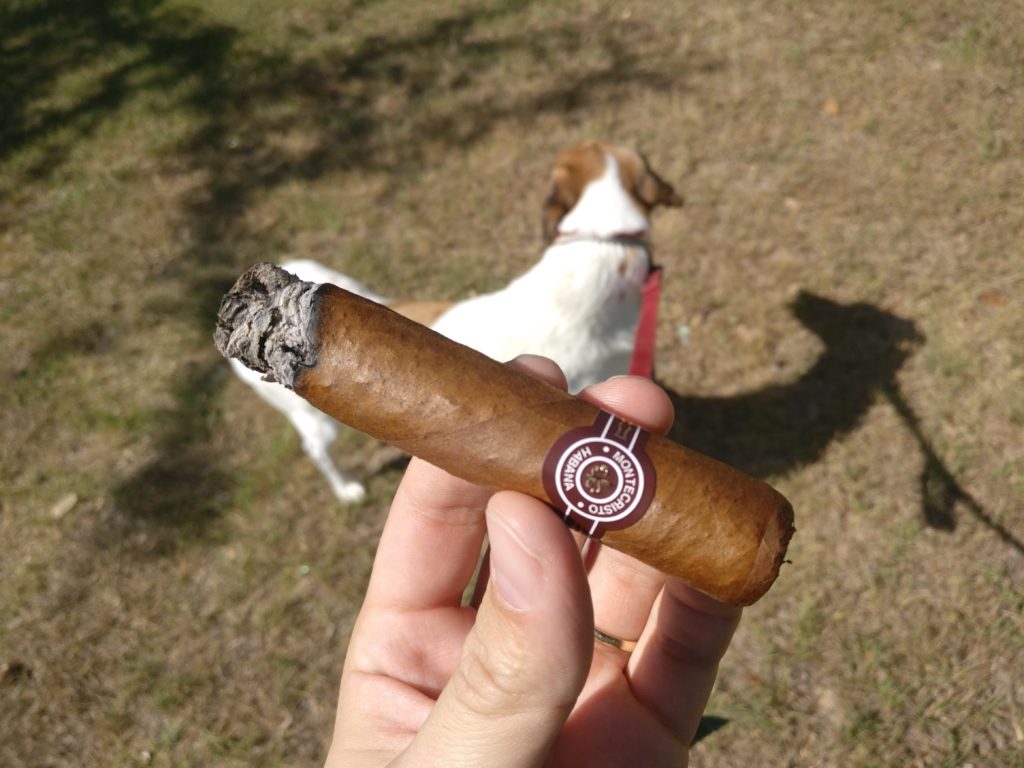 Lighting the cigar was easy (hooray two-burner butane Zippo insert). For the first third of the cigar the flavor was light, almost like a Connecticut cigar. The flavor was very interesting: it tasted like I was smoking a black tea, perhaps an Earl Grey. Definitely delicate, not the “hit you over the head with a sledgehammer” that I usually associate with the maduro cigars. Or, as my boss would complain, “there will be some taste eventually, right?” Then again his idea of good tasting food is Hooters, so take that as you will. 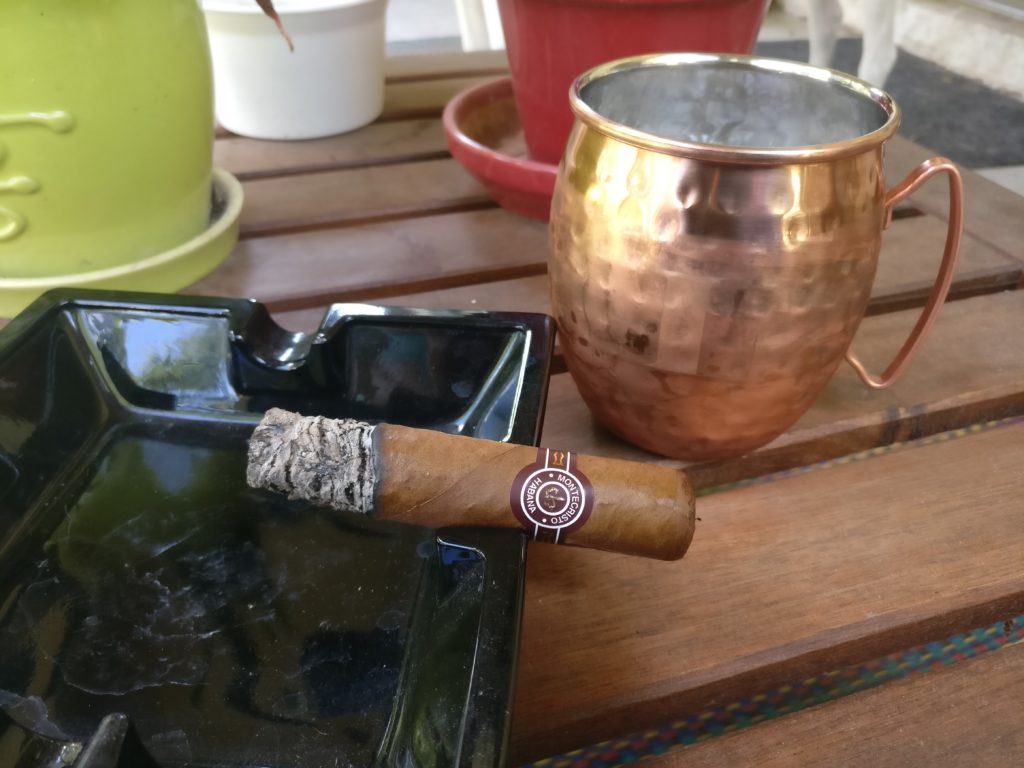 Around this time Rudy was getting tired and we headed home. I left him on the back porch watching my cigar in the ashtray while I went inside and quickly made myself a Kentucky Mule — like a Moscow Mule, but using burbon instead. Pro tip: don’t go for the diet ginger beer. I made that concession in the “we need to fit into our wedding clothes” hell that was the months before the wedding but as soon as this stock runs out I’m back to full fat. It just doesn’t taste the same.

Sitting on the back porch for the second third the taste started to change. The delicate flavors of the first third became much stronger, with tones that I would usually associate more with a maduro cigar. The way the cigar eases you from the delicate light flavors to the stronger heavy flavors was excellent and subtle, so much that you probably wouldn’t notice — just enjoy. At this point I really started tasting the cedar as well from the box it was kept in. 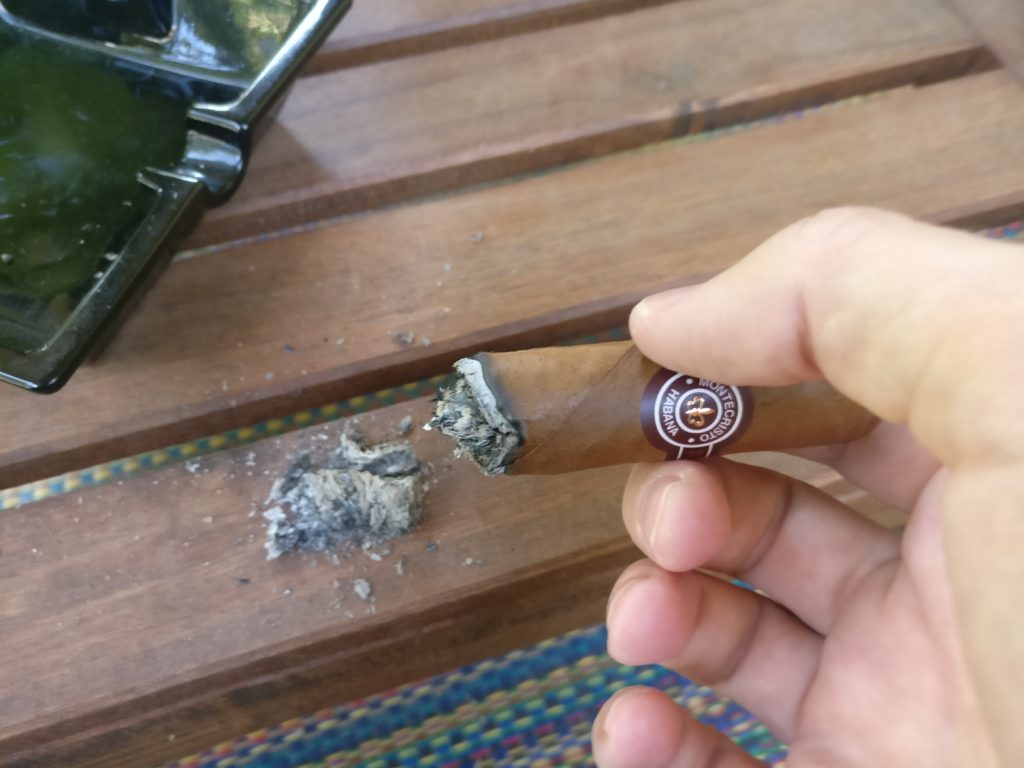 The ash did a good job holding together… right until it didn’t. It let go without warning just as the cigar crossed the halfway mark. I’d like to say that’s the only time I’ve gotten ash on the nice patio furniture but the wife knows that’s a lie.

As the cigar melted into the last third the flavors remained the same. It continued to draw well right until the very end, and even as I was starting to smoke the cap itself there was no ill taste or change in the profile. Smooth to the very end.

In Paris I paid 10.95 euros per stick for the box of 25. I’d like to say they gave me a discount for the box, but then again these are Parisiens and I’m 99% sure they can see through my crappy American accent to the sucker underneath. Of the fourteen that made it back to the US not a single one had any structural issues, and they are all (with this one exception) sitting comfortably tucked away in my humidor waiting for another beautiful afternoon.

10/10 would be ripped off by a Frenchman again.