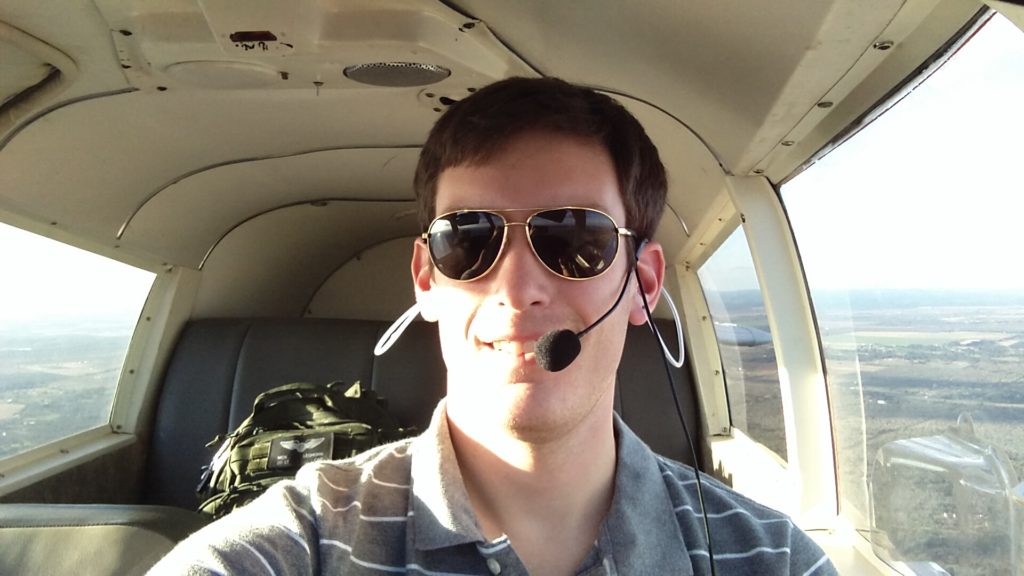 There’s little doubt that David Clark’s H10 headset is the gold standard for general aviation. When I started flight training that was the very first purchase I made, and over the years they have served me well. For short hops around the local area they really can’t be beat — they are relatively inexpensive, easy to use, and do a great job of blocking out the engine noise so you can focus on communicating on the radios. But as soon as my flights started pushing past the two hour mark I realized that I needed something better. That’s when I decided to give the Halo headset from Quiet Technologies a try.

About halfway from San Antonio, Texas to Provinetown, Massachusetts I realized that my choice of headset might not have been ideal. It took two full days to make the journey, spending well north of eight hours each day in my Piper Cherokee drilling a hole through the sky. It started out great, but even up at altitude the earmuffs of the David Clark headset made sure that my ears were a sweaty mess. The constant pressure they exerted on my noggin wasn’t great either and contributed to an annoying constant headache that took a day or so to settle down. I resolved that before I tried that journey again I would try to find an in-ear solution that was more comfortable to wear for long periods of time.

The market for in-ear aviation headsets is pretty much a binary choice. On the high end the Clarity Aloft headset claims to provide a superior solution with an optional TSO’ed version for Part 121 pilots. Quiet Technologies seeks to serve the lower end of the spectrum, cranking out their Halo headset at almost a 50% discount. Since I recently purchased my aircraft and was enjoying the empty bank account associated with that status I decided to roll the dice and give the Halo headset a try.

QT seems to have an issue keeping these headsets in stock. They also warn of shipping issues, cautioning their customers that it might take a while for their order to arrive. So when I clicked on one day to discover that they actually had some in stock — in black, no less! — I jumped on that like a fat kid on cake and ordered myself a set. My first pleasant surprise was that it didn’t take two weeks for the set to arrive but instead only about two days. Good on you, QT.

The Halo headset comes in a slim black carrying case, roughly the size of a good paperback novel. Well constructed and stylish it provides an easy way to tote your headset around, one that doesn’t take up much space in your flight bag. 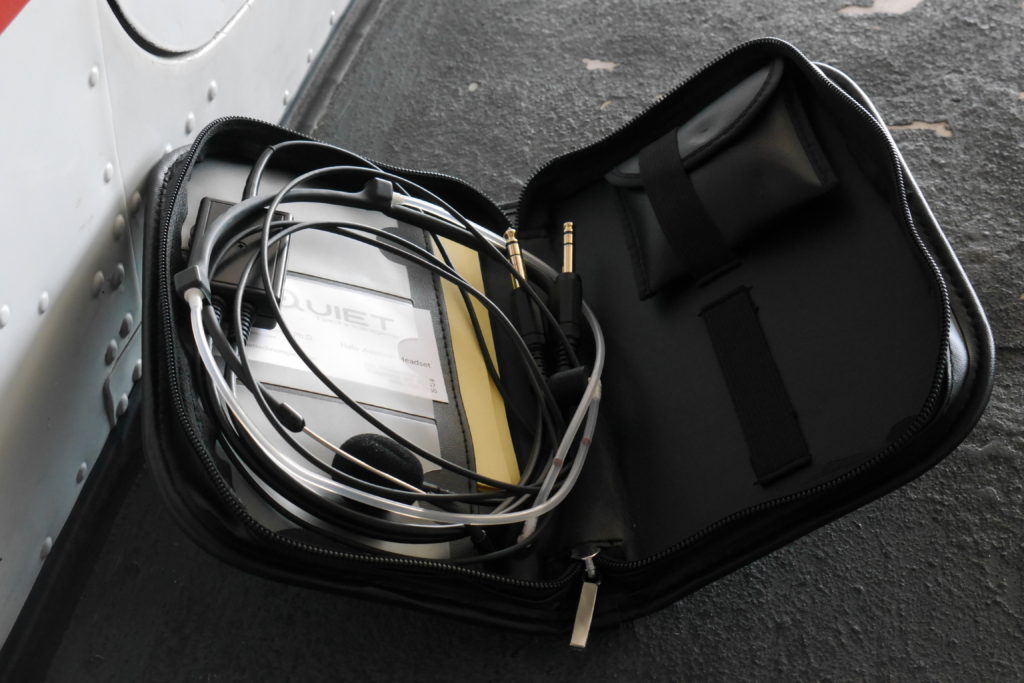 Inside the case is the headset itself, coiled up for storage. Also included is a business card for Quiet Technologies with their phone number (for any issues) as well as an instruction manual. There’s also a small black pouch with extra foam earpieces of varying sizes, although even with my huge ears I found that the standard size works just fine.

One issue I found was that the headset is slightly larger than the internal size of the pouch. It fits, but it takes a little bit of squishing to make that work. 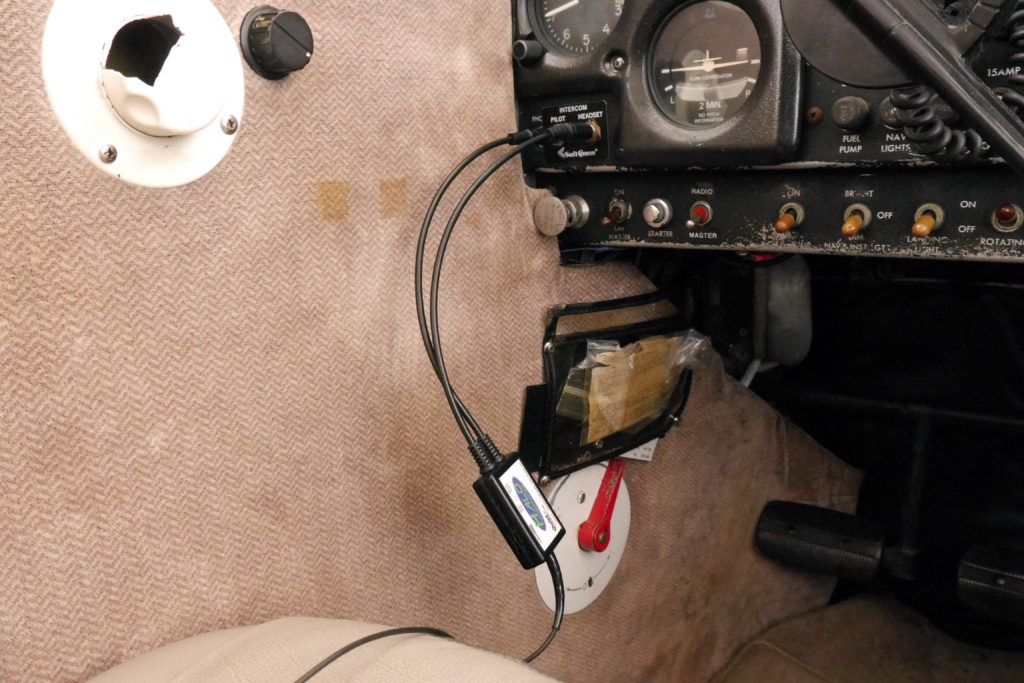 The Halo headset connects to your plane’s COM system through the usual two-plug configuration — no additional configuration required. The two chunky plugs have about a foot of wire hanging off before converging in the control unit for the headset, allowing you to easily cable them up no matter what inconvenient location your local avionics guy has placed those jacks. I used them just last weekend in an older Cessna 182 where the back seat plugs were underneath the arm rest and this extra bit of cord allowed me to install them without an issue and even access the control box with ease.

While I appreciate the leeway the extra cord allows, in my specific PA-28-180 this configuration puts the control box precisely at the same height as my knees. This can get a little annoying as I constantly feel the box rubbing against my leg throughout the flight. I think I’d like to see a little more distance on the connections before the control box to alleviate this issue, but in the grand scheme of things its a very minor annoyance for the benefit they provide. 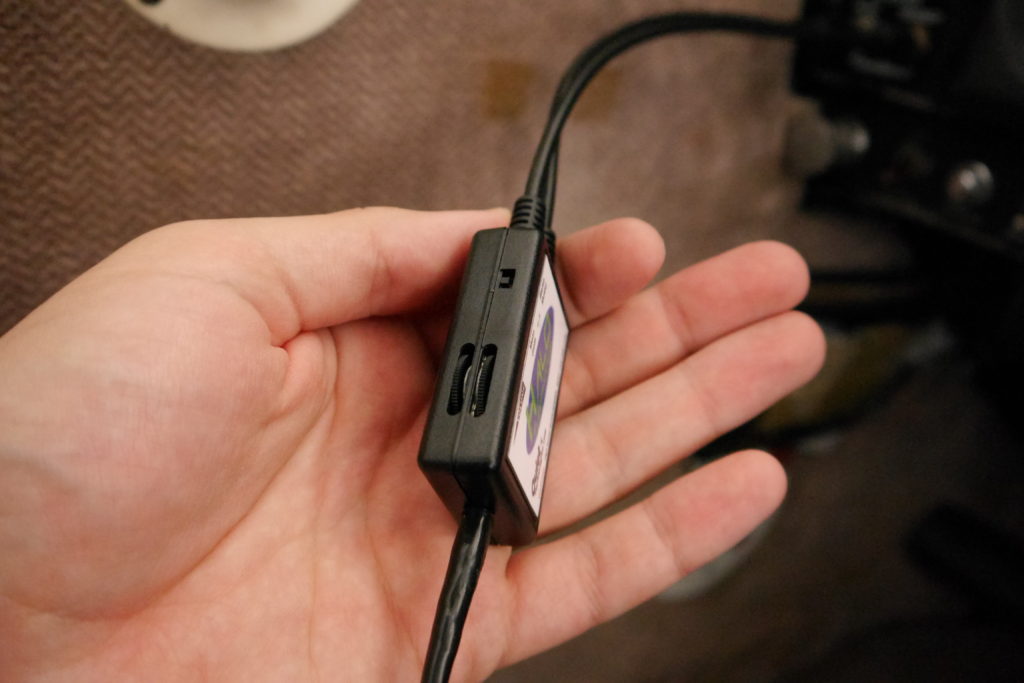 The control unit on the Halo headset offers a volume adjustment knob as usual, but there’s a twist. Instead of a single control for both left and right earpieces the Halo offers individual controls for the left and right channel. For normal operations this can prove to be a bit annoying — since the control box is constantly rubbing against my legI’ve found that one channel will occasionally get bumped to a different volume setting than the other and require a bit of adjustment. That said there’s a very good reason for the split operation, and it is activated through the little toggle switch you see here.

Over on the other side of the box is a 3.5mm audio jack, which allows the wearer to pipe in audio from a source of their choice. I usually patch in my phone and use that to listen to music for the long stretches of sky where I’m cruising along and nothing else is happening. Instead of mixing the audio from the two sources into one single stream QT handles this by splitting the audio feeds — the left channel continues to monitor the radios, but the right channel plays whatever is being piped into the 3.5mm jack. I think this is a pretty nifty solution, allowing the wearer to individually control the levels on both audio streams and keeps the ATC audio free from being cluttered by extraneous noises.

There is one catch: the audio is local only. Only the wearer can hear what is being played through this jack, not any of the passengers. For those traveling with companions you will either need to invest in an audio splitter so you all can enjoy the tunes or your companion will just need to suffer in silence while you rock out to your Journey collection.

The audio from the box is passed through a thin wire to the headset proper, where individual drivers embedded in the headset loop convert the signal into sound. This is then passed through plastic tubes to the earpieces. A bendable boom protrudes from one side of the headset with a microphone attached to the end that can easily be positioned to capture your voice, and the other end is capped with a bent section to keep the headset from slipping off your ear.

My concern with this headset comes from that small wire. While I appreciate that it is as slim as can be, I’m concerned that it will break after a while and render the headset useless. There’s not much reinforcement at the attachment point to keep it from being snapped off. That said, over a year of near constant use (~150 hours) and it is still in perfect working order so take that concern with a grain of salt.

Up in the air the headset functions perfectly. The foam earpieces block out just about as much sound as my old David Clark headset which is truly appreciated in a small piston aircraft like mine. The slim design of the headset loop allows me to wear sunglasses without any comfort issues and without interfering in the operation of the device. And the light weight of the overall design means that even after a full day of flying I don’t feel any discomfort either from pressure applied to the sides of my head or that the headset has weighed me down at all. In short, it almost feels like I’m wearing nothing at all.

Overall I’m truly impressed by the QT Halo headset. It blocks out enough engine noise to be able to hear both ATC as well as my passengers without any issues, and audio quality over the radio talking back to ATC or the other occupants is superb. It does feel its price — the control box feels a bit cheaply constructed, and I feel like the design isn’t as robust as it could be in order to keep costs down. But the difference between this headset and the old David Clark headclamp is night and day. There’s no way I’m ever going back.

Overall (out of five): * * * *
It works, and it works remarkably well. The only reason it doesn’t get the full five stars is the build quality. A slightly better constructed control box and a better connection between the box and the headset would make this a perfect unit, but even as-is the QT Halo is worth every single penny. Give it a try and I guarantee that you will never go back to wearing earmuffs ever again.