A job at the airlines can be intimidating. Jet aircraft are complicated beasts and there’s a ton of training that comes with the position. Thankfully, for those who are thinking of going down that career path but want to dip their toe in the lake before diving in headfirst (or for those, like me, who have resigned themselves to the fact that airlines will never be an option but want to have a weekend long experience) the ATOP or Airline Training Orientation Program is a great option to get the feeling of what jet training at the airlines is really like.

The ATOP is an independent third party organization that provides the experience for interested pilots and non-pilots (although a pilot’s license is really encouraged). They work with American Airlines’ training center in Dallas and JetBlue’s training center in Orlando to offer a one day course and simulator ride in 737 and A320 aircraft respectively. They provide this program by using otherwise unscheduled time in the same simulators used for training their line pilots (such as in the middle of the night).

While there is a website for the program, the best place to get updates is either by emailing them or watching their Facebook page.

I originally heard about this through my non-pilot AvGeek friend in Florida. He had always wanted to do the program himself, but he wanted a buddy to go through the program with. When we found a date that worked for both of us we emailed the program and made all of the arrangements, and even scheduled a quick day trip to Chicago to pick up enough deep dish pizzas to hold us through the weekend since the Dallas location was just south of DFW airport and flights to Chicago were dirt cheap.

When you register for the course you will be given access to a few documents. Those include:

Being a massive nerd I immediately read and studied all of these documents from front to back, but for those who tend to have a proclivity for procrastination they will also be reviewed (in more depth) during the full day classroom session.

The American Airlines Flight Academy, which is where the course is held, is located only a few miles south of the Dallas Ft Worth airport. Thankfully the location makes it ideal not only for people flying into the area, but also for staying close to the training center. There are a ton of great options for hotels in the area. That said, the ATOP usually has a specific hotel they prefer and will run a shuttle from that hotel to the training center for the classes and such.

The Flight Academy has a cafeteria which is where breakfast and lunch will be offered (bring cash to make this easier).

The majority of training in airline flying is classroom learning, and the ATOP follows that model. For the first day the vast majority of the time is spent in the same classrooms used by American Airlines air crews during their training where the instructor will cover the systems and procedures for the Boeing 737 aircraft.

The classroom session focused on the main systems such as pressurization and power, but gave specific attention to how the different systems interacted and how to troubleshoot through problems. This would definitely come in handy later during the simulator flight.

Personally I found this fascinating. Then again, like I said, I’m a massive nerd. I appreciate understanding how the fuel scavenge system works. For others this may be minutiae that you’ll never need. Either way it gives you a great understanding of the breadth and speed of classroom training at airlines.

While the classroom was nowhere near full, there were definitely more students than I expected. I’d say there were about ten to fifteen people in the course.

Following the classroom training, students were split into groups and brought to the procedures trainer.

The planned flight had well defined parameters — climb straight ahead, turn to this heading, circle back around, land — with specific call-outs and interactions required at each phase of flight. After the classroom sessions understanding the magic under the hood this was to be our practice session to make sure that we knew these procedures and call-outs cold and could make the most of our simulator time instead of bumbling through the checklist.

We started with a paper version of the layout, allowing us to identify each switch and familiarize us with the cockpit layout. Then we moved to the computerized version. 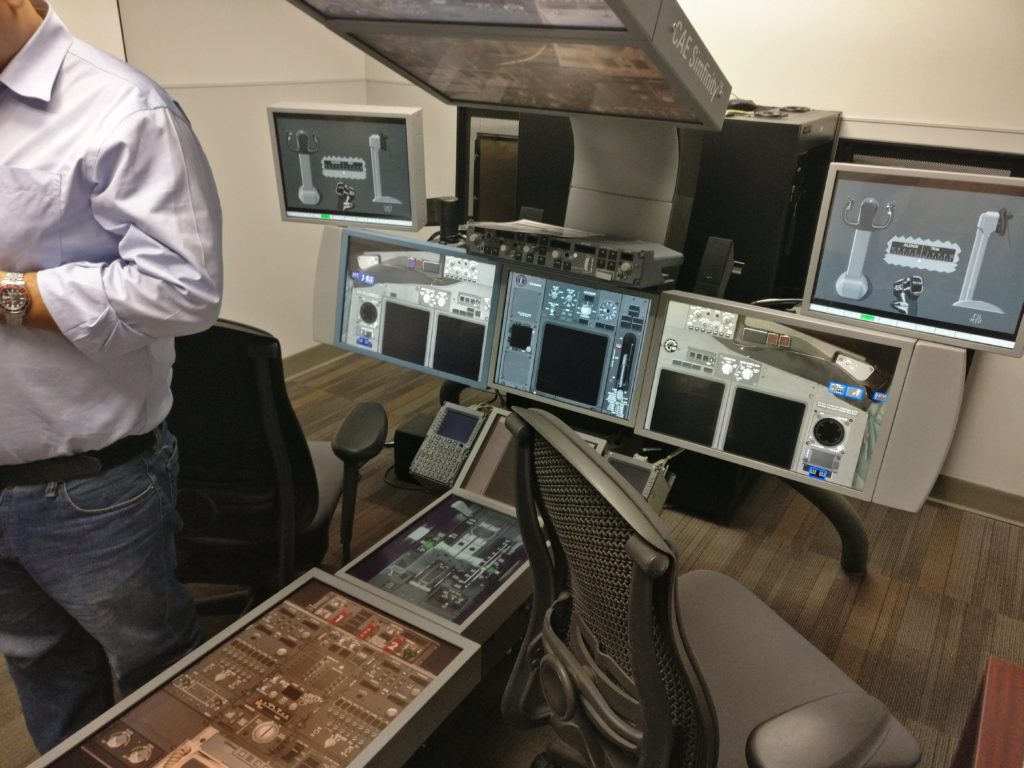 These tools were basically a functioning version of the paper procedures trainer posters, where you can run each system and basically fly the airplane (but without a yoke or an outside view). Both here and with a paper version of the trainer we were drilled on the procedures and call-outs for our lap around the DFW airport and instrument approach. This also included a couple of possible emergency scenarios.

What I found really interesting was that these computerized trainers actually had a Hobbs meter installed, and time in these simulators was somewhat loggable as instrument time.

Once everyone was appropriately drilled it was a quick trip back to the classroom to discuss the logistics of the simulator schedule. For our class they had booked a block of time around midnight, and we split into pairs and were assigned a specific block of time to arrive and be ready to fly. Two pairs per slot were booked, the idea being that one group would go first, then the other, then the first group would go again but the pilot flying would switch to the other person and so on.

Naturally my group was assigned the last time slot: 2 AM.

The Flight Academy is a massive facility with corridors that go all over the place. Very easy to get lost or disoriented. Nevertheless, at the appointed hour we arrived at the simulator and prepared for our flight. 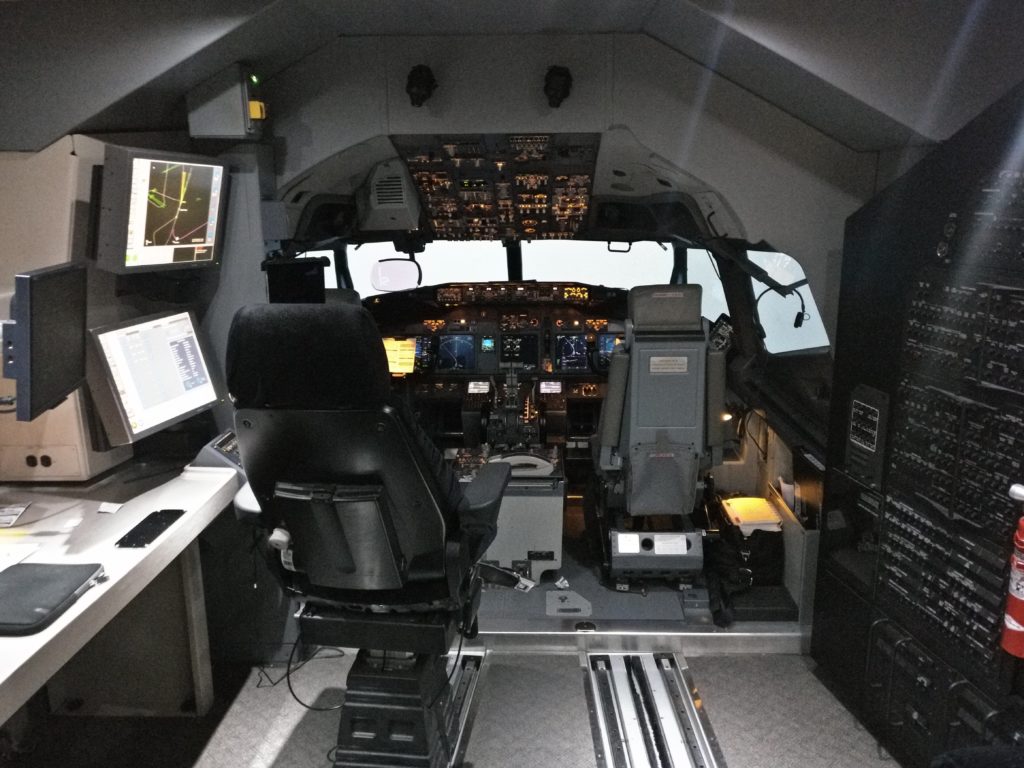 The 737 simulator is surprisingly spacious, with room enough for everyone in the group (including the non-flying pilot pair).

For our flight, each pilot had about fifteen minutes of “pilot flying” time and fifteen minutes of “pilot monitoring” time. For each of us the plan was to line up, take off from DFW, do a lap around the airport, and land back on the same runway. Then, after a tough and go, the aircraft would be configured and set up for an ILS approach to the airport for a full stop landing. 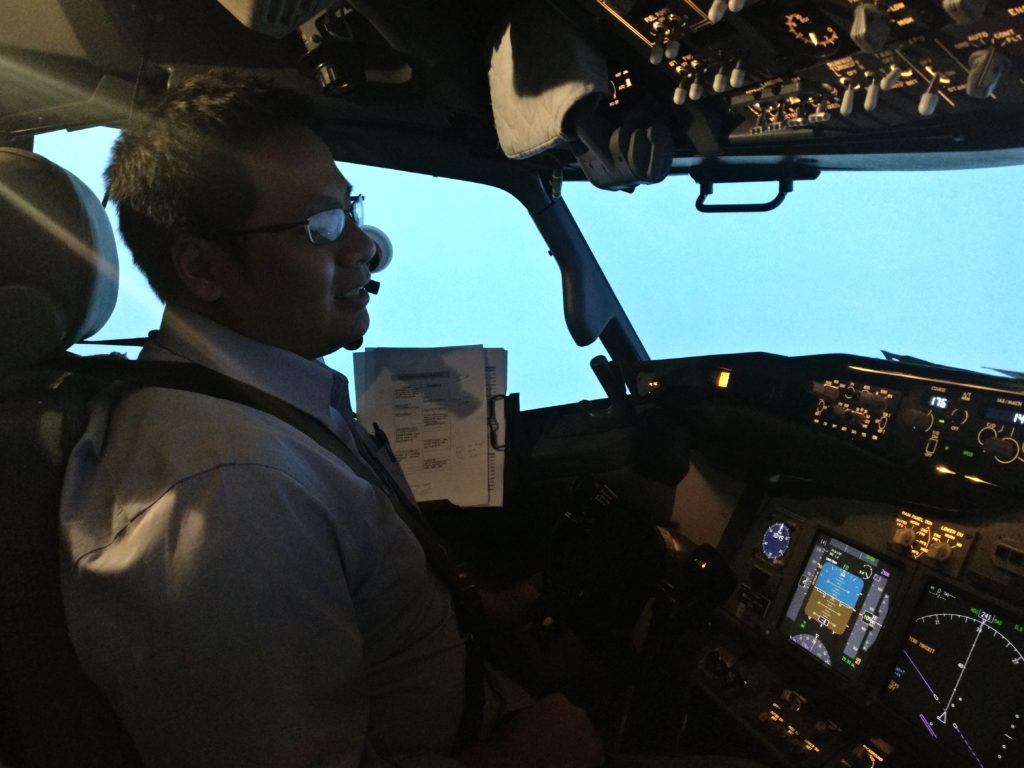 At some point during the flight the instructor would throw in a curveball — for us, he had one of the CSDs in the engine overheat. We needed to identify the problem, discuss what it means, and implement a solution all without an emergency manual. It was a real-time practical application of the classroom learning we had done earlier that day and was one of the more interesting and engaging flight experiences I’ve ever had.

I also appreciate that I had two perfect landings, while my non-pilot partner (who considers himself a pro after spending a couple hours in Microsoft Flight Sim) porpoised the aircraft both times leading to a near nausea inducing ride.

After everything was all said and done the instructor signed off on our logbooks (because it was indeed loggable training in an approved simulator under the instruction of a qualified instructor) and we headed home.

It’s not cheap, but it’s totally worth it for the experience. For those who have ever wanted to know what it’s like to train like an airline pilot and fly one of these big and complicated jet airliners it’s well worth the price of admission, and for those able to get their high altitude endorsement that’s just the icing on the cake. We’re already looking for when we can go do the Orlando version at JetBlue in the Airbus A320.