Nestled in bucolic “Happy Valley” Pennsylvania, the University Park Airport is the closest large commercial airfield to The Pennsylvania State University. The airfield operates regularly scheduled regional flights out of the commercial aviation terminal, but just to the east of that on the field is the General Aviation terminal which acts as the FBO for private aircraft. The location of the airfield smack dab in the middle of Pennsylvania makes it very appealing for pilots looking for a quick fuel stop, and the long runway and ILS landing system put this strip on the list for my top favorite airports in the United States to visit. Whether you’re just passing through or spending some time in Happy Valley this airport is a wonderful gateway to central Pennsylvania.

In terms of flying around the 13 colonies, this might be the least congested and least headache inducing piece of airspace in the whole lot. University Park Airport is located in a small Class D bubble of airspace with nothing but beautiful uncontrolled airspace surrounding it. Mid-State Airfield (PSB) west of town is shrouded in some Class E airspace all the way to the ground but is easily avoided.

For those flying on an instrument flight plan it might be a little inconvenient to use the standard victor airways to reach KUNV. The closest VOR is Philipsburg (PSB) 7.7 NM away and there are airways converging on that VOR from all directions except from the southwest. Arrivals on radials 180 through 270 can either re-route along airways around that little dead patch or file for an off airway routing instead.

It should be noted that there is only one ILS approach for this airport on runway 24. There is an RNAV approach approved for runway 06 and a VOR approach as well that can use either runway, but the lowest minimums are 200 feet above the threshold of runway 24. Even with a tailwind this shouldn’t be an issue due to the long runway, but it is something to consider when planning a flight.

The arrival itself into University Park Airport is absolutely stunning. Especially on a bright clear day the visibility is excellent, and while there are some rather tall hills that surround the airfield the ILS approach course follows the valley and provides a great view of the surrounding towns and the Penn State campus in the distance. There are very few obstacles in the area to worry about (save for some radio towers on Mount Nittany and the surrounding hills) but these are easily avoided. The traffic pattern around the airport stays well within the valley for piston aircraft. 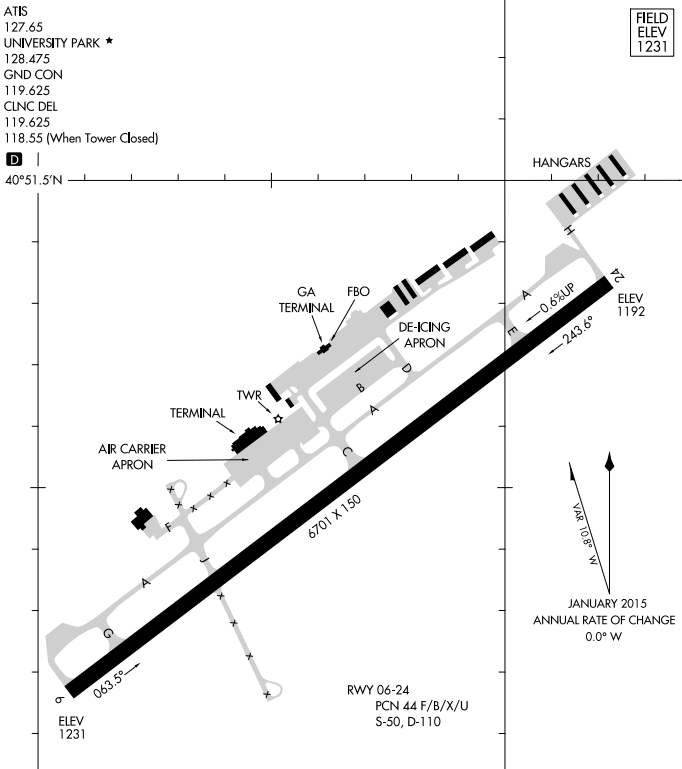 Just like many other small regional airports, the University Park Airport offers a single runway (06/24) with an adjacent full length taxiway. There’s also a run-up pad on either end of the runway for piston aircraft so they don’t interfere with the faster jets, which is a very nice touch. What most other small regional airports don’t offer is over a mile of asphalt — 6,700 feet of excellently maintained runway that once hosted Air Force One.

Most small aircraft should expect to exit the runway at taxiway C and proceed past the air carrier ramp on the left to the General Aviation terminal (which operates 24 hours a day).

Parking space on the ramp is rather generous. There’s enough room to park your Piper Cherokee or Hawker 900XP, whichever you decided to dust off for the day’s travels. Access is available 24/7 through the FBO.

Once inside, the FBO is a beautifully maintained area with plenty of light, a water fountain, and tons of places to sit down and do some flight planning (or take a nap I suppose). The bathrooms are acceptable but seem a little outdated compared to the rest of the FBO. There’s a front desk on your left as you walk in where you can request fuel and pay for your stay. The staff were extremely helpful in my experience.

In terms of fees, I purchased about 40 gallons of AvGas and paid for one night on the ramp but wasn’t charged anything else. There may be a facilities fee for larger aircraft or those who don’t buy gas but I didn’t see that on my tab.

Once everything is settled for the night now you need to get into town. The airport is located a few minutes drive from the Penn State campus and downtown State College, which means you will need to organize some transportation to get there. The FBO offers a courtesy crew car for short stays, or for those staying a bit longer there are rental cars available from all the major brands at the commercial terminal a short walk down the road. Failing all else there’s a good chance you can grab a cab into town, but that will probably end up being the most expensive option.

The #1 reason to visit KUNV is the proximity to State College and Penn State University. The folks at the FBO tell me that the ramp is absolutely packed on football game weekends with people flying in to watch the game, and the same can be said of people dropping their children off and picking them up throughout the semester.

For those who aren’t connected with Penn State there’s still some awesome stuff to see. Downtown State College is packed with delicious restaurants all priced for the starving college student’s budget, and tons of interesting shops. Two personal recommendations are The Corner Restaurant for lunch and the Cigar Den on Frazier Street for an afternoon’s smoke.

This area of Pennsylvania might be called Happy Valley, but from the air it still seems remarkably flat. The runway is aligned with the valley to give pilots a nice long stretch of unobstructed airspace to climb, and VFR departures in any direction shouldn’t have an issue after a couple minutes in the initial climbout.

IFR departures can be a bit of a pain especially towards the southwest. Filing for the REC VOR as the initial point on your flight plan when heading in that direction worked just fine for me (the first “as filed” clearance of the trip, actually), and the only departure procedure listed for the field requires a climb to 2,600 feet before heading on course from either runway. Easy as pie.

Once out of the valley contacting NY Center is possible even on the terrible radios in my 1960’s Cherokee.